Joël Desbouiges was born on a frosty morning in the Benaize valley, in High Limousin, Marche Occitane. As a boy he used to chase exaltations of larks, he liked the sharp and humid scent of green grass, amused by the zigzag of deaf snipes flying away from him.
Come spring when the night breathes its last sighs, the young man visits the banks of the Anglin or the Allemette river to fish some nice fat brown trout. In the fall, when the wind is starting to blow, he takes to the woods to pick ceps while circling the thickets where the partridges sing.
These years will be defining for his work and his entire life.
One drenched day of April he declares to his parents his intention to study art. Not really surprising for his family and friends, who have by now collected his drawings, oils and still-life paintings for quite a few years.
The years he spends at the Limoges National School of Decorative Arts are happy and full of discoveries. Under the watchful eye of his university professor, Claude Viallat the painter, he produces a vast quantity of large-scale canvasses charged with political meaning. Desbouiges keeps a deep friendship with Viallat to this day and even though he never adopted the ideas of the inventive art movement known as “Supports/Surfaces” he was undeniably influenced by it and his work retains its great graphic freedom.
His extraordinary productive capacity can be daunting; dozens of paintings and hundreds of drawings, which all belong to truly different alleys of successful research. Photographs, drawings, installations, objects and paintings are like question marks; reconsiderations which are part and parcel of a life filled with doubt, a constant tug of war between abstraction and representation. Painting is questioning, colors and strokes fascinate him. However, if to be a painter remains a fundamental question to him, his answers all convey his concerns over the loss of the benchmarks of identity, the dwindling collective memory and notion of transmission.
In all his visual quests Desbouiges plays with the senses and the titles, the knowledge of the stand and the colour treatment. He revels in works that are underlined with meaning, he likes them to make you smile, because these games keep the painting alive and demand that you look at it all over again.
He belongs to a generation of artists conveniently forgotten in France in the 80s. A generation formed and forged by a great freedom of expression and which refused to fully adhere to the networks and institutions of the so-called Contemporary Art. A generation that continues to answer to the «Art Vivant» and refuses any form of hierarchicalism in art-based practices. Desbouiges turns his back on an art form which remains rigidly fixed in deceit and seems to be laced with a poison that suppresses emotions. He runs away from imposters and explores further, in a need to communicate and simplify at the same time. In his work, Art is both poetic and critical. Surrounded by writers, poets and philosophers since his youth, he still craves their words.
In his work studio, forever located in the countryside, Desbouiges summons artists of centuries past, Contemporary Art holding no special place. To him the painting is a mask: that of the painter. His research is nourished by his unique relationship with nature. He doesn’t witness what happens, but experiences what is unfolding. Over the course of time, his art is at the heart of the seasons, sometimes in the face of disturbing world events.
In his exhibitions he tries to bring people together, professionals of the art world and surprised newcomers. He never forgets his simple background and allows himself to be seen as a country man; a lover of rivers and woods who embraces life surrounded by his dear friends, art gallery and museum directors, all those who trust or have trusted his work and who will trust him again.

« All the birds on the earth now started. Where had they been all night? Then a streak of light in the east and a little breeze off the lake. »
Jim Harrison, Warlock, 1981. 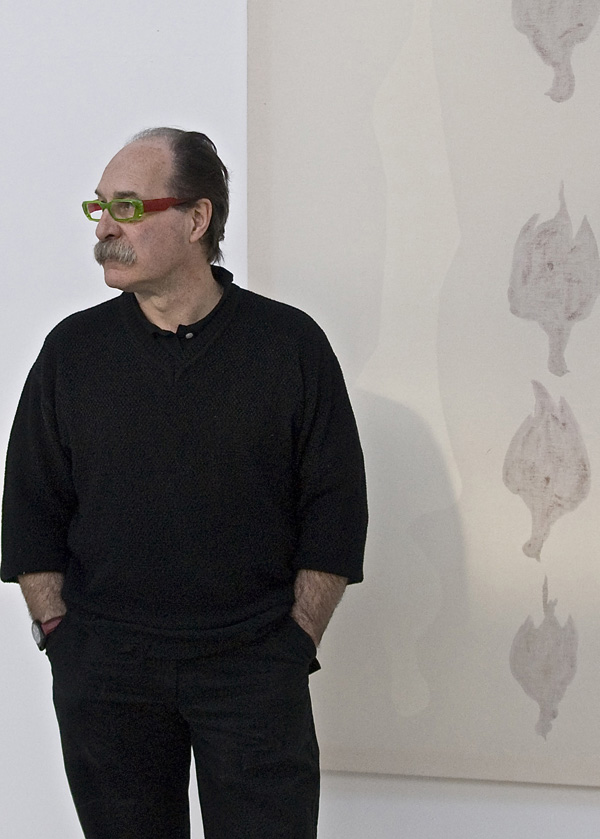